Cities are cauldrons of creativity. They have long been the vehicles for mobilizing, concentrating, and channelling human creative energy. – Richard Florida

Art in the public sphere is collectively owned. We all feel that we have a stake in the work, and maybe we aspire to own it. Offered up as it is in the adult playgrounds of our cities - our parks and squares, the places we pause to reflect and relax - it is ours to share, even if just temporarily. From Rachel Whiteread's provocative and ultimately ephemeral concrete House (1993),2 controversially destroyed by Tower Hamlets Council (but which won her the Turner Prize), to Lorenzo Quinn's wittily exuberant Vroom Vroom (2010), installed in 2011 by Halcyon Gallery on Park Lane, public art possesses the power to confront and shock, surprise and amuse. A dialogue is set up with the viewer that is inquisitive, open and indefinable. The work can be just as easily ignored by one person as adored by another. A multiplicity of interpretations is accessible. Perhaps, even more importantly, it can momentarily, temporarily or permanently reframe the urban landscape and for an instant, as we hurry from home to office, ask us to pause and experience the city in unexpected ways. Public art is central to keeping our cities constantly evolving through both human  and humane channels.

In 2011, Halcyon Gallery curated a discerning sculpture trail through London, taking in artworks by many of the artists they represent. This trail created an elegant dialogue between London landscapes and bold landmark sculptures, including Simon Gudgeon's Isis (2008) in Hyde Park, Lorenzo Quinn's The Force of Nature II  (2009) in Berkeley Square and Mauro Perucchetti's Jelly Baby Family (2010) at Marble Arch.

These innovative explorations of prominent sites as dramatic public settings for art -  a distinctive vision of the gallery - are set to continue, both nationally and internationally. Cultural projects such as London's Fourth Plinth have captured the public imagination, often becoming the focus of heated debate. In no less a venue than Trafalgar Square, with the bastion of the National Gallery behind it, the vacant plinth hosts a rolling programme of exciting contemporary artworks. Overlooked by Nelson's Column and surrounded by historic monuments, it took as its first commission Mark Quinn's controversial, poetic and bold white marble sculpture Alison Lapper Pregnant (2005). More recently, Antony Gormley's unprecedented living sculpture, One & Other (2009), involved 2,400 volunteers in an hour apiece on the plinth, producing a novel form of performance art. By gathering responses from the public to new shortlisted proposals via an exhibition and a website, the Fourth Plinth programme encourages an appreciation of and familiarity with contemporary art.

Prior to the Second World War, public art in Britain consisted mainly of historical monuments, statues and memorials. The City of Westminster alone has over 300 public artworks, many by leading artists of the time. Excluding the 3,500-year-old Egyptian obelisk popularly named Cleopatra's Needle, the oldest is the statue of Charles I in Trafalgar Square, dating from 1633. Following each of the World Wars, commissions for memorials and statues proliferated, marking the huge loss of life but also commemorating feats of heroism. Later, however, Modernism began to filter into the public realm in the form of bold murals and challenging sculptural forms. The 1951 Festival of Britain gave significant impetus to this shift towards new sculpture commissions for open spaces and was celebrated with events held across Britain, most notably on London's South Bank. Planned in 1947 during the Attlee Labour government, the festival was designed to boost the morale of post-war Britain through innovation, industry and art. It was directed by newspaper editor Gerald Barry, who described it as a 'tonic to the nation'. The 1951 guidebook remarked, 'It will leave behind not just a record of what we have thought of ourselves in the year 1951 but, in a fair community founded where once there was a slum, in an avenue of trees or in some work of art, a reminder of what we have done to write this single, adventurous year into our national and local history.'5 Scale and ambition were key for the 10 million visitors, and the steel Skylon tower by the Thames, rising to a height of 90 metres, became a symbol of the event. The artworks featured in the festival, by such artists as Henry Moore, Barbara Hepworth and Eduardo Paolozzi, became embedded in the nation's collective consciousness.

Placing public art in the open spaces of our cities encourages people to engage directly with contemporary sculpture in an informal setting. It raises questions, asking them to think about themselves within society, inviting them to react, to address ambiguity and to critique. The 'public' in public art is thus not solely about its presence in communal areas; it concerns a conversation with us as individuals in a cultural society. This complexity is evident in references to TV culture and consumerism within Perucchetti's Modern Heroes (2010) and his 'Jelly Baby' series, which prompt a wider discourse on the underlying themes of role models, greed and ethics. What is compelling about these public sculptures is their power to draw us in. We respond, bringing to them our own understanding based on our own experiences.

Public art asks us big questions about life and values, mortality and morality,  and it does so on a monumental scale in subtle, possibly even deceptive, ways.

Throughout the changing seasons - in snow and ice, from leaf-burst to the heat of a summer's day and on to the blaze of autumn colours - outdoor displays of public art offer a one-off encounter in a rare and private moment. As afternoon light crosses the face of Gudgeon's Search for Enlightenment (2010) sitting serenely on the banks of the Thames alongside Tate Britain, or winter chill lies heavy on the legendary form of Dashi Namdakov's Khanshaim (2008) in Astana, Kazakhstan, or the heat of a Doha day reaches its zenith over Lorenzo Quinn's Rise Through Education (2005), the powerful hands holding the world aloft  in a sapphire sky, in each of these moments the artwork takes on a fresh form that cannot  be replicated.

Internationally, the common factor uniting renowned contemporary public artworks is their scale and ambition. Set against the backdrop of dramatic cityscapes and striking architecture, their placement makes a crucial contribution to defining a sense of place. When considering the lexicon of contemporary public art it seems inconceivable not to mention Gormley's Angel of the North (1994-1998), a site-specific steel sculpture that through its artistic vision and engineering triumph has become a beacon for the Northwest, creating a collective identity for that region of Britain. The work demonstrates the iconographic power of public art to assimilate meaning and become implanted in our subconscious. Dale Chihuly's wondrous 'Chandeliers', their vivid skeins of glass weaving into the sky, are further spectacular and extravagant celebrations of imagination and craftsmanship. In the vertical architecture of the city the Park Lane Chandelier (2011), which forms part of Halcyon Gallery's ongoing offering of art in the public realm, is a glowing landmark for London's Park Lane. This magical installation in front of the Art Deco façade of the Dorchester Hotel mesmerises passers-by with its flaming spirals.

Public art generates an interaction with the cityscape it inhabits. 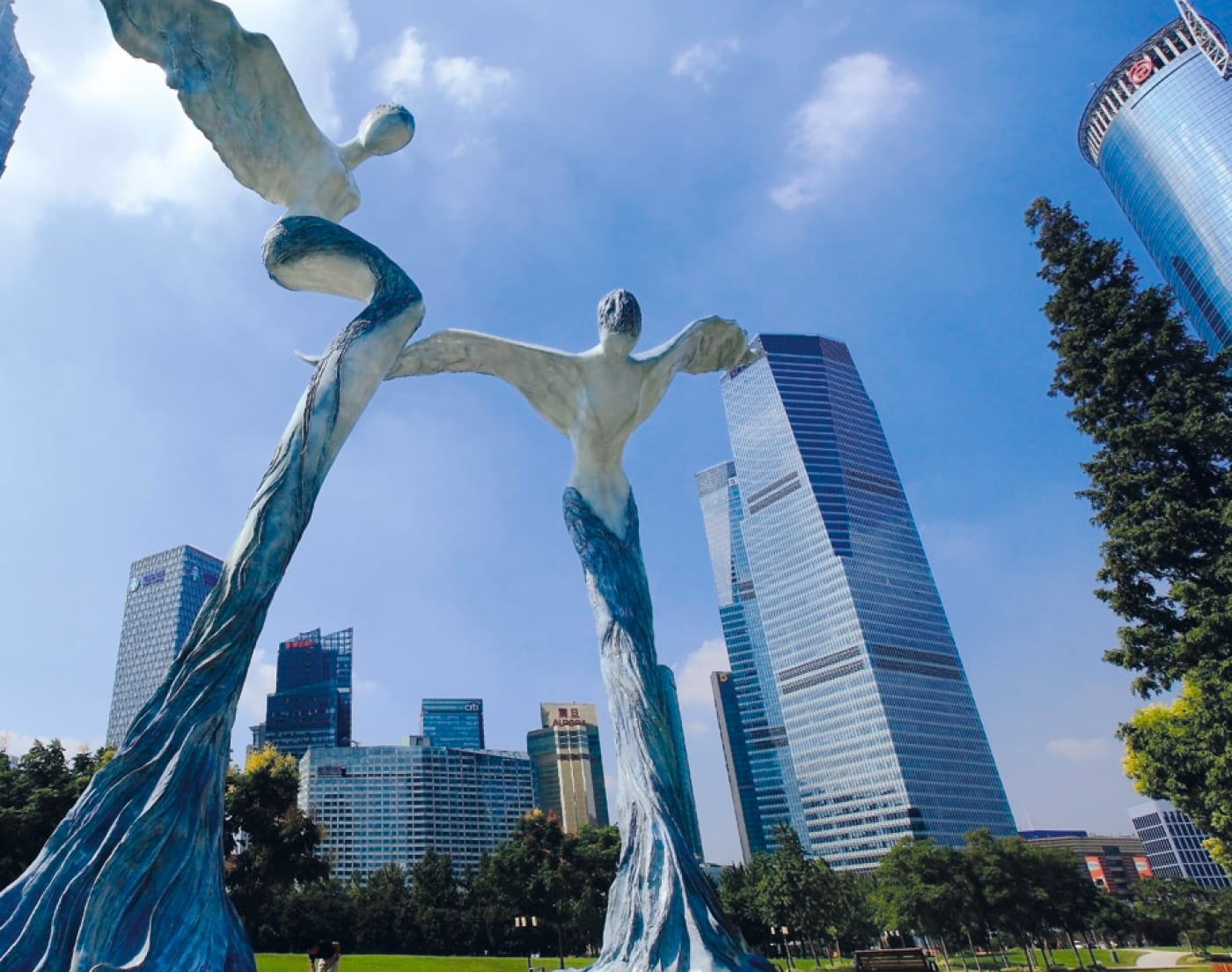 Another huge endeavour of 2011 was the installation of Wu Ching-ju's Pro Terra et Natura (2011), one of the tallest sculptures in China, in the wonderful surroundings of Lujiazui Central Park in Pudong, Shanghai. For Halcyon Gallery, both this project and Quinn's This is Not a Game were important milestones in developing an internationally significant curatorial role in major cities of the world. Pro Terra et Natura afforded the gallery and the artist a unique and privileged opportunity to work with Shanghai Pudong Lujiazui Development Company, the Pudong Cultural Department and the Shanghai Municipal Planning Bureau in order to place the work in such a significant and central location within the city. Bending elegantly towards the ground, the forms of Mother Earth and Nature set up a dialogue with the silhouette of the Shanghai skyline, their seeming fragility heightened by the towering buildings. The wings of Wu's figures seem almost to carry the weight of the skyscrapers. Standing with dignity in the green of the park, an oasis in the city, the pale bronze spirits gently reflect the environmental concerns in her work. There is a subtle juxtaposition of place and artwork, an amalgamation of eastern roots and western influences.

While public art by its nature fluidly assimilates into the landscape and enhances it, there also exists an inherent authority exerted by the artist on the beholder. In return, viewers often wish to interact with an installation on a physical as well as an emotional level. This double draw on the viewing public is demonstrated by Gudgeon's graceful sculpture Isis, on the edge of the Serpentine in Hyde Park. At its unveiling in September 2009, the artist spoke passionately about his aims: 'Sculpture for me and in particular public sculpture must encapsulate beauty … it must enhance its surroundings and it must uplift the spirit'. That visitors to Hyde Park have embraced Isis is abundantly clear. The lovely arc of the neck draws them in. People touch and stroke the sculpture, enjoying the tactility of the smooth bronze, which is a distinctive feature in Gudgeon's work. A monumental piece that has similarly succeeded in promoting interaction and bringing creative energy to an open space is Anish Kapoor's reflective Cloud Gate sculpture (2004-2005), nicknamed 'The Bean' by locals, which dominates the AT&T Plaza in Chicago's Millennium Park.

The success of such projects as Isis, initiated by Halcyon Gallery in partnership with The Royal Parks Foundation to raise awareness and funds for the Isis Education Centre, proves the power of public artworks of this magnitude and ambition to become a stimulus for positive change. Since the Festival of Britain in 1951, there have been many movements that have contributed to the liberation of contemporary sculpture from the gallery, positioning works in some of the world's most dramatic urban settings. Through the reframing of landscape, these important pieces ask us to look at both the art and our cityscapes with fresh eyes.

Artists are scaling great heights of monumentality and complexity, exploring new materials and demonstrating feats of engineering. The artworks themselves have power to engage individuals and communities and promote dialogue. Public art is about making creative works easily accessible, placing them in the front gardens of our urban realm and inviting people to respond - to think, understand and touch. It now has a significant geographical spread, from the steppes of Kazakhstan to the canals of Venice, from the Royal Parks of London to the deserts of Qatar, evidencing the ability of art to overcome cultural, linguistic and national boundaries. We look forward to seeing what the next few years will bring.

An extract from Reframing the Urban Landscape

Lucy Tyler, director of public art at the cultural consultancy Futurecity, is a curator, project director and arts writer. Committed to embedding the arts and culture at the heart of the public realm, she works in partnership with large-scale urban regeneration programmes, major British cultural institutions and the private sector. Tyler's involvement in arts management for two London galleries has included the exhibitions Towards a Rational Aesthetic: Constructive Art in Post-war Britain (2007) and Masterpieces of Modern British Art: Selected Works from the Derek Williams Trust and Amgueddfa Cymru - National Museum Wales (2008). She has worked with contemporary artists Richard Wilson, RA, and Turner-prize nominee Mark Titchner and managed the estates of the eminent British painters Peter Kinley and Edward Wadsworth. Academic studies have included Anthropology specialising in Visual Culture at University College London and History of Art at Birkbeck College, University of London. She sits on the Royal British Society of Sculptors' Education Committee.

Get exclusive updates from Halcyon Gallery

Sorry, filters could not be displayed. Please try again.
Close